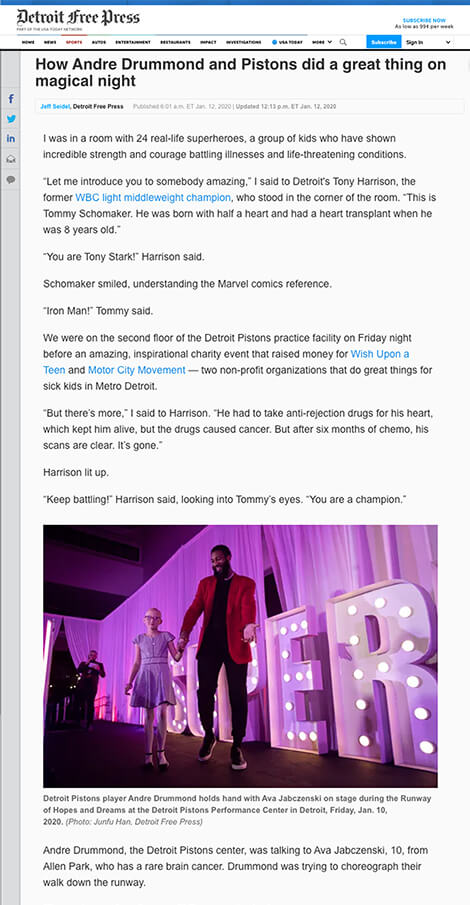 “Do you have a favorite move?” Drummond asked. Drummond was smiling and acting silly, mimicking a fashion model walking down a runway, swaying his hips and Ava smiled. “Let’s do something fun!” Drummond said.

Reggie Jackson, the Pistons guard, was talking to Darin Clayborn, who was diagnosed with Hodgkin's lymphoma. They were practicing a handshake that they planned to do at the end of the runway. Jackson quickly turned it into a competition. He was going to come up with the most entertaining moment on the runway, and he started talking trash. “You all are gonna be second place!” 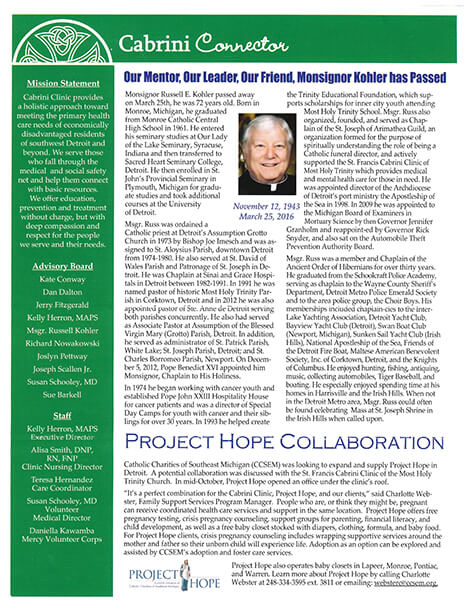 Monsignor Russel E. Kohler passed away on March 25th (2016), he was 72 years old. Born in Monroe, Michigan he graduated from Monroe Catholic Central High School in 1961. He entered his seminary studies at Our Lady of the Lake Seminary, Syracuse, Indiana and then transferred to Sacred Heart Seminary College, Detroit. He then enrolled in St. John’s Provincial Seminary in Plymouth, Michigan for graduate studies and took additional courses at the University of Detroit. … 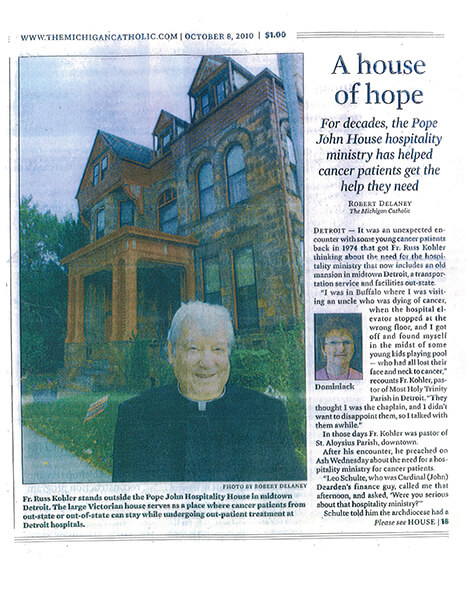 Detroit – It was an unexpected encounter with some young cancer patients back in 1974 that got Fr. Russ Kohler thinking about the need for the hospitality ministry that now includes an old mansion on midtown Detroit, a transportation service and facilities out-state. … 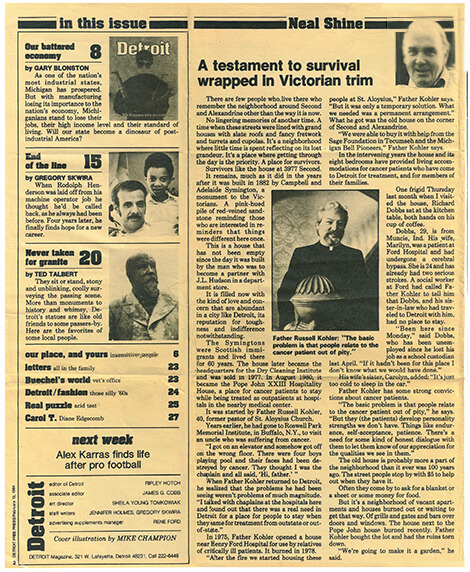 There are few people who live there who remember the neighborhood around Second and Alexandrine other than the way it is now. No lingering memories of another time. A time when these streets were lined with grand houses with slate roofs and fancy fretwork and turrets and cupolas. It’s a neighborhood where little time is spent reflecting on its lost grandeur. It’s a place where getting through the day is the priority. A place for survivors. … 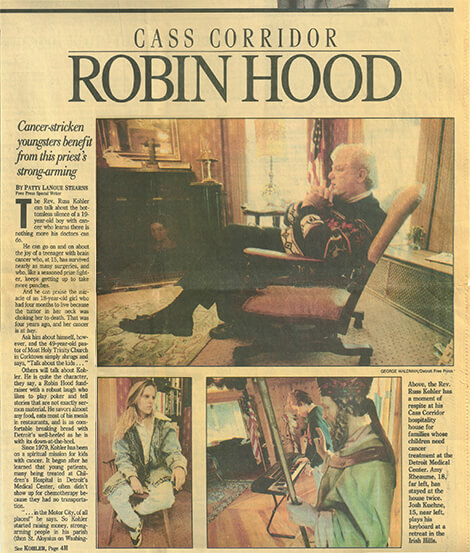 The Rev. Russ Kohler can talk about the bottomless silence of a 19-year-old boy with cancer who learns there is nothing more his doctors can do. He can go on and on about the joy of a teenager with brain cancer who, at 15, has survived nearly as many surgeries, and who, like a seasoned prize fighter, keeps getting up to take more punches. … 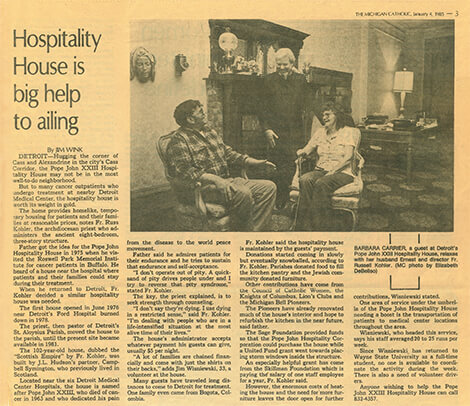 Detroit — Hugging the corner of Cass and Alexandrine in the city’s Cass Corridor, the Pope John XXIII Hospitality House may not be in the most well-to-do neighborhood. But to many cancer outpatients who undergo treatment at nearby Detroit Medical Center, the hospitality house is worth its weight in gold. … 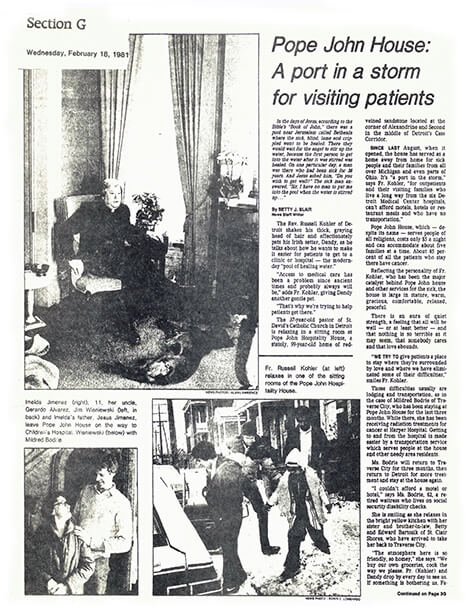 The Rev. Russel Kohler of Detroit shakes his thick, graying head of hair and affectionately pats his Irish setter, Dandy, as he talks about how he wants to make it easier for patients to get to a clinic or hospital – the modern-day “pool of healing water.” … 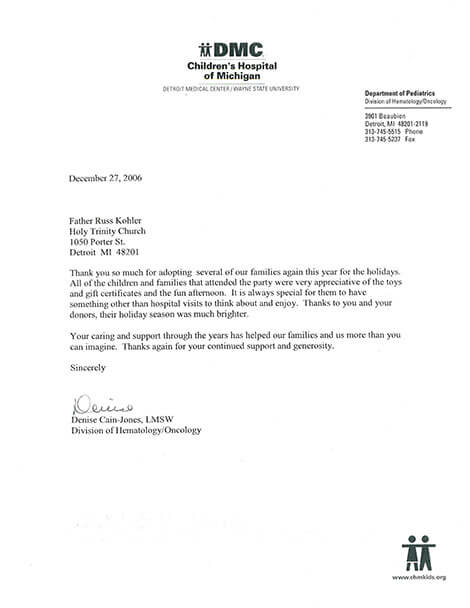 A letter of gratitude to Msgr. Russ Kohler for hosting a Christmas party for cancer patients and their families. … 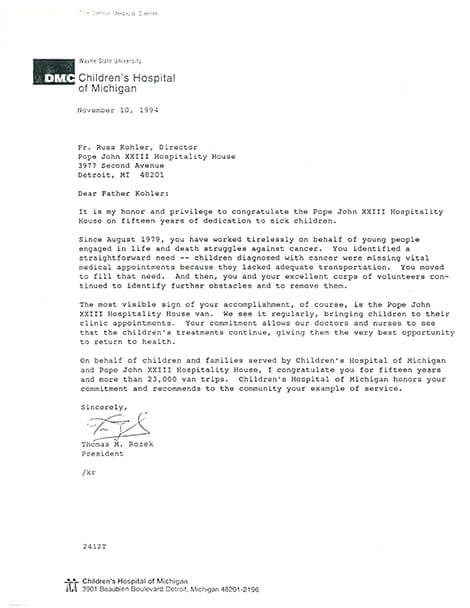 Congratulatory letter to Msgr. Russ Kohler for the 15 years of service the Pope John XXIII Hospitality House provided to cancer patients and their families. … 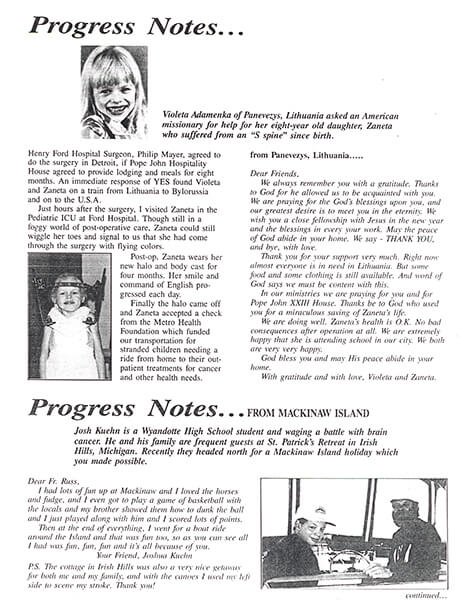 A collection of progress notes from three different families who were blessed to know Msgr. Russ Kohler and his ministries through the Pope John XXIII Hospitality House and St. Patrick’s Retreat in Irish Hills, Michigan. … 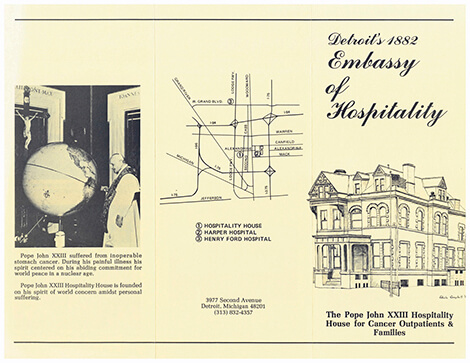 Cancer Patients travel a long way for specialized care. The treatment often does not require hospitalization, and so it is necessary to find a place that is understanding and sensitive to the outpatient’s needs. Such a place is the Pope John XXIII Hospitality House. …

For more information, to make a donation, or to apply for a grant, please email us at info@KohlerKidsCancer.com