A Celebration of Life

Born November 12, 1943, in Monroe, Michigan, Msgr. Russell "Russ" Kohler was the son of the late Vernon A. and Mary E. (Kellison) Kohler. Msgr. Russ graduated from Monroe Catholic Central High School. He entered his seminary studies at Our Lady of the Lake Seminary, Syracuse, Indiana and then transferred to Sacred Heart Seminary College, Detroit. He was then sent to St. John’s Seminary in Plymouth, Michigan, for graduate studies and took additional courses at the University of Detroit.

Msgr. Russ was ordained a Catholic priest at Detroit’s Assumption Grotto Church, April 15, 1973 by Bishop Joe Imesch and was assigned to St. Aloysius Parish, downtown Detroit from 1974-1980. He also served at St. David and Patronage of St. Joseph in Detroit.

He was Chaplain at Sinai and Grace Hospitals in Detroit between 1982-1991. In 1991 he was named pastor of historic Most Holy Trinity Parish in Corktown, Detroit and on July 1, 2012 he was also appointed pastor of Ste. Anne de Detroit serving both parishes concurrently. 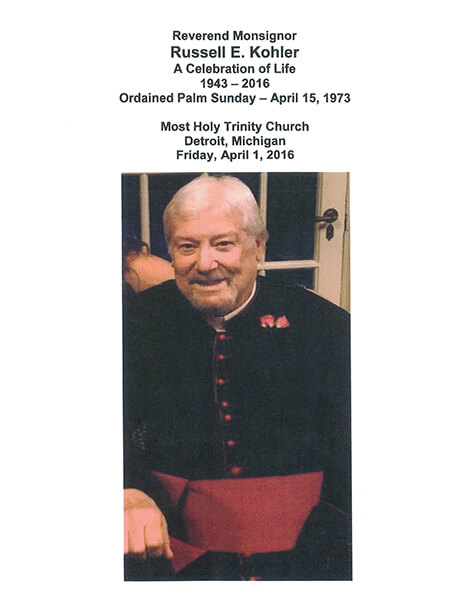 Good Works: Service to the Community

Throughout his life, Msgr. Russ played an active role in many community and church-affiliated organizations, and through these good works, touched the lives of many individuals:

He enjoyed hunting, fishing, antiquing, music, collecting automobiles, Tigers Baseball, and boating. He especially enjoyed spending time at his homes in Harrisville and the Irish Hills. When not in the Detroit Metro Area, Msgr. Russ could often be found celebrating Mass at St. Joseph Shrine in the Irish Hills when called upon.

Msgr. Russ Kohler's good works were the subject of many newspaper, magazine and newsletter articles. To read some of these historic documents, visit our In The Media page.